Micromax backed Yu brand has taken the wraps off its latest flagship smartphone, dubbed the Yu Yutopia. Priced at Rs. 24,999, the Yutopia impresses us on design front as well as on spec-sheet. It will compete with the OnePlus 2 that carries the same price tag.

In this post we have pitted the two flagship phones against each other to help you decide which smartphone should you buy. Read on to find out how Yu Yutopia vs OnePlus 2 compare with each other in terms of specifications, features and price. 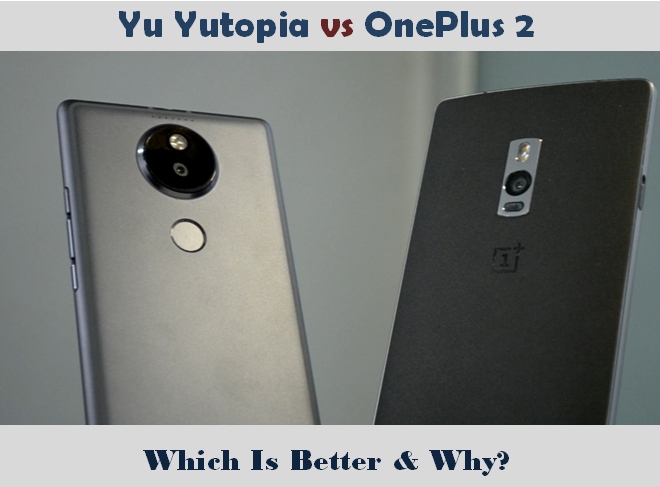 On aesthetics front, the Yutopia has a more appealing design compared to OnePlus 2. The display of Yutopia is smaller than the rival and it features a camera bulge on the rear. The OnePlus 2 on the other hand looks nice and comes with a slider button the which toggles in positions- Top, middle and bottom for different fundtions.

The Yutopia comes with an adaptive fast charger, micro-USB cable and premium earphones from the House of Marley. The OnePlus 2 comes with USB Type-C but lacks fast charger and earphones. OnePlus 2 users have to buy these accessories separately.

At the heart of both smartphones is a Qualcomm Snapdragon 810 chipset coupled with Adreno 430 GPU and 4GB of RAM. On testing these phones on Antutu, we got 57,000 score for Yutopia and 54,000 for OnePlus 2. Gaming experience on both smartphones is excellent and we didn’t face any major heating issues on any of these devices.

The Yu Yutopia runs Cyanogen OS 12.1 based on Android 5.1.1 Lollipop while the OnePlus 2 runs OxygenOS based on Android 5.1. Both smartphones have minimal bloatware. While the former comes loaded with Around  Yu app that allows users to conveniently explore and access services ranging from buses, flights, cabs, hotels and more without downloading any third party app, the OnePlus 2 comes with Shelf feature.

The Yu Yutopia is fueled by a 3000mAh battery and supports Quick Charge 2.0 technology that charges the phone from 0 to 60 percent in just 30 minutes. The OnePlus 2 on the other hand, has a larger 3300mAh battery.

AS for SIM support, the Yutopia features hybrid dual SIM port such that the second slot can be used to accommodate either a SIM card or a microSD card. The OnePlus 2 comes with dual SIM 4G support but it lacks expandable storage support via microSD card.

Audio quality and clarity of both phones is average and could have been better.

The Yutopia comes with double data offer from Airtel and 6 Months free subscription of Gaana app.

Both flagship smartphones are loaded with top-notch specifications and features. Except few differences, the specifications of both phones match in several departments. The Yutopia comes with a slightly smaller screen but has splendid screen resolution and pixel density. The camera combination of the device is also impressive. The OnePlus 2 comes with a larger battery but lacks microSD card support and offers less screen resolution.

Which smartphone- Yu Yutopia vs OnePlus 2 would you buy? Share your views with us in the comments section below.